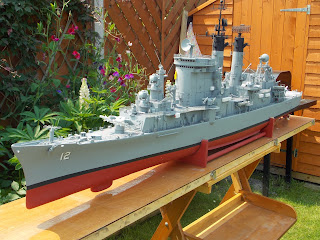 This is my model of the USS Columbus a US Navy guided missile cruiser , the model is R/C and sails very well , although sensitive to the wind I will update this blog with photos from the build process as I get time. I hope you like it ..Paul
The hull, superstructure, running gear and fittings are scratch built, the only commercial items are the propellers (Propshop) and Deans Marine etched brass ladders. The stairways are also deans marine etched brass with scratch build hand rails.

Motive power is provided by four 555 sized motors running on 6 volts driving scratch built running gear. The rudder fitted is to scale and provides a very good turning circle without having to reduce or reverse the inboard shafts however port and starboard motor pairs can be independently controlled. The model was based on US government plans and detailed from photographs.

To aid stability in high winds a portion of the ballast is held in a drop keel , shaped like a model yacht’s. It can be raised when the boat is on it’s stand and removed for transport. Although no strictly not necessary, the lowering of the ship’s centre of gravity aids handling giving a slower scale roll when turning. A similar system was installed on my model of USS Long Beach, which also has a large tall superstructure.

The majority of the fittings are castings, all the masters and moulds for these fittings were made by the builder. No commercial fittings were used. Most masters were made from plasticard. Etched brass mesh was used for many of the aerial platforms with scratch built
rails. Deans Marine etched brass ladders and stairs were used , again with scratch built hand rails
﻿
Ship's History
USS Columbus was originally built as a Baltimore class heavy gun cruiser at the end of the second world war. In May 1959 she undertook an extensive conversion from her heavy cruiser guise to a guided missile cruiser. Her entire superstructure and armament was removed the replacement structure was like no other class of ship. She was recommissioned
as CG 12 (guided Missile cruiser). Her smoke stacks (funnels) and masts were replaced by combined structures called macks (a feature repeated on several classes of US warships).  With her 8” guns removed her main weapons were twin Talos Missile launchers fore and aft with two twin Tartar missile launchers either side of the forward superstructure. She was intended to carry the Regulus II cruise amidships, ASROC was fitted instead. Two single 5” gun mounts were added at the base of the rear ‘Mack’


The plethora of radars associated with the Talos missile system gave the need for the bridge structure’s tall design.
There were two other ships in the Albany class , Albany herself along withChicago, all three were known as the “Tall Ladies” . The Columbus was the tallest
of the three, being 190 feet from the water line to the tip of her mast. She was slightly taller than the Coral Sea aircraft carriers. The conversion increased her displacement by over 4000 tons. There were two other ships marked for similar conversions both were cancelled before work commenced. Two further Baltimore class ships the Canberra and Boston received less extensive, and thus cheaper, conversions to carry Terrier missiles aft leaving the 8” guns fwd. 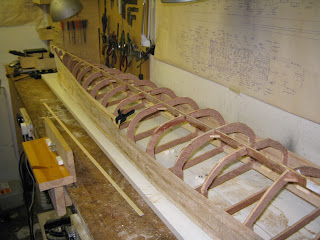 ﻿
I use a home made jig to cut my balsa into uniform width planks, it's basically just a Stanley knife blade mounted at an angle. it is spaced off the back board using springs, this also gives a degree of adjustability for plank widths. The two white blocks are used to keep the balsa sheet in position whilst I push it through. 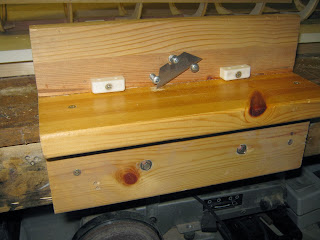 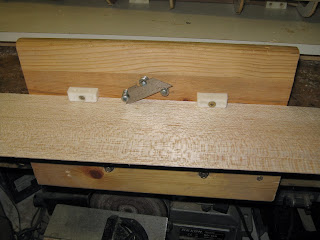 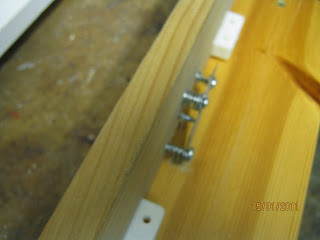 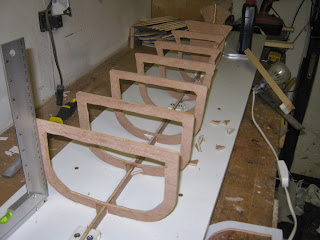